Investigating the making of the Virgin of the Yarnwinder by Leonardo da Vinci, Spain 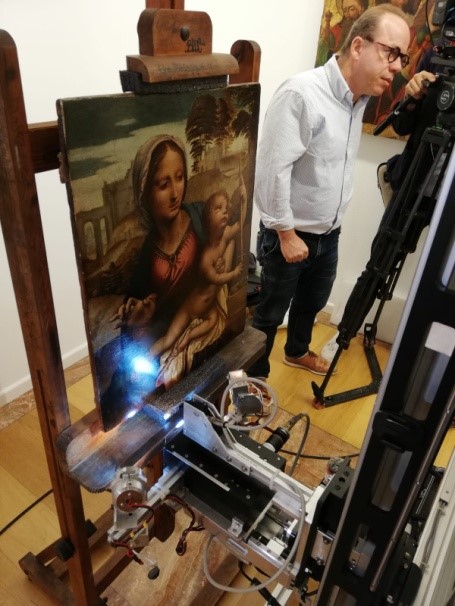 Out of the several versions and copies that are known, two of the Virgin of the Yarnwinder have been the subjects of a more attentive study: the ‘Lansdowne’ and the ‘Buccleuch’, both known after the family names of their previous owners. Revolving around the two paintings there are questions concerning their attribution, but also Leonardo’s painting and studio practices. The latter subject is in fact the very core from which the present study originates; how can the master’s own practices be understood in the context of his flourishing workshop?

Both of the aforementioned paintings share almost identical features in relation to their underdrawing, revealing similar pentimenti and, generally speaking, a parallel evolution of the composition. Since the beginning of the conservation treatment of the Lansdowne Virgin of the Yarnwinder in 2016,a vast campaign of investigations into its techniques as well as a research on the different groups of “families” has led to the understanding that a cartoon of the original composition may have existed. A strategy was devised to establish key works that would allow for further insights into the making of the Lansdowne Virgin. Most significant sets of families with regards to technical features(measurements, support etc.) but also formal composition were selected. The Lansdowne Virgin of the Yarnwinder was the focus of two campaigns of scientific and technical investigations carried out 10 years apart at the Opificio delle Pietre Dure (Florence).

A previous application to use the MOLAB facilities was granted in 2016 for a painting of the same subject in the National Gallery in Edinburgh. This painting is understood as from the “Baby-Walker Family”, a group of paintings which share the depiction of a group of figures present in the underdrawing of the Lansdowne Virgin but absent in the final composition. The results gathered made it possible to clarify some issues about the chronology of the Lansdowne composition.

The goal of this MOLAB project was to repeat the same analysis on the painting in Murcia, which belongs to the “Spanish Family”, to provide with comparable data, which eventually allow to follow other hypotheses about the possible painting phases of the Lansdowne Madonna. The main idea was to reproduce the same multispectral analysis on the painting to better understand the process of creation of the composition in relationship with other examples, already examined. The Murcia painting has been selected in consideration of its chronology that makes its execution in Leonardo’s workshop very probable.

← PICASSO’S ACROBAT FAMILY IN FOCUS: a further investigation of materials and techniques of an iconic work in the collection of the Gothenburg museum of art Revisiting cleaned acrylic paintings: 10 years on →