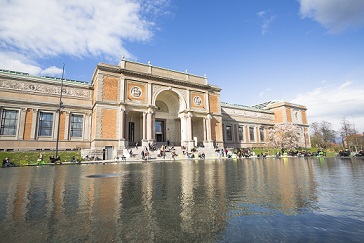 Statens Museum for Kunst (SMK), the national gallery of Denmark, is Denmark’s principal museum of visual arts and as such a non-profit, national institution funded primarily by the Danish state.The aim of the museum is to impart knowledge and appreciation of Danish and foreign art, especially Western art from the 14th century to the present – through collection, registration, preservation, research and education. The museum’s collections form the basis of research and general educational activities. The collections of the museum contain works by Mantegna, Titian, Rembrandt, Rubens, Gijsbrechts, Abildgaard, Hammershøi, Willumsen, Nolde, Jorn and Lemmerz, to mention only a few, a fine collection of Danish Golden Age paintings, including Eckersberg and Købke, works by Picasso and an internationally acknowledged collection of works by Matisse.

Apart from the more than 9.000 paintings the SMK also holds a Collection of Prints and Drawings which contains about 250,000 works: engravings, drawings, etchings, watercolors, lithographic works and other kinds of art on paper. Although the collection contains a great number of foreign works, Danish art makes up the bulk of the acquisitions. Nowhere in the world can you get an equally detailed and broad overview over Danish art from the 17th century until the present day. In addition, the collection of plaster casts of statues and reliefs from collections, museums, temples, churches, and public places throughout the world meet in our annexe Vestindisk Pakhus. Here we keep casts of sculptures from antiquity through to the Renaissance: Egyptian Kings and mythical beasts, Greek gods and human beings, Roman Emperors and scenes of battle and sacrifice. The collection testifies to beauty, drama, imaginative force, and the history of thought from as far back as 2500 BC and up until the year 1600. 4,000 years of sculpture under one roof.

The main museum building dates back to 1896 and was designed by the Danish architect Wilhelm Dahlerup. The building was short of space from the very beginning. In 1970 the roofing of two atrium wells in the middle of the museum increased the amount of floor space available for exhibitions. An extension from 1998 has provided the museum with a significant – and much-needed – increase in the exhibition space.

SMK is involved in the platform ARCHLAB  through CATS, Centre for Art Technological Studies and Conservation, which includes, apart from SMK, the National Museum of Denmark (NMD) and the School of Conservation at The Royal Danish Academy of Fine Arts, Schools of Architecture, Design and Conservation (KADK).