Recovering Giotto at the Basilica of Saint Anthony, Padua 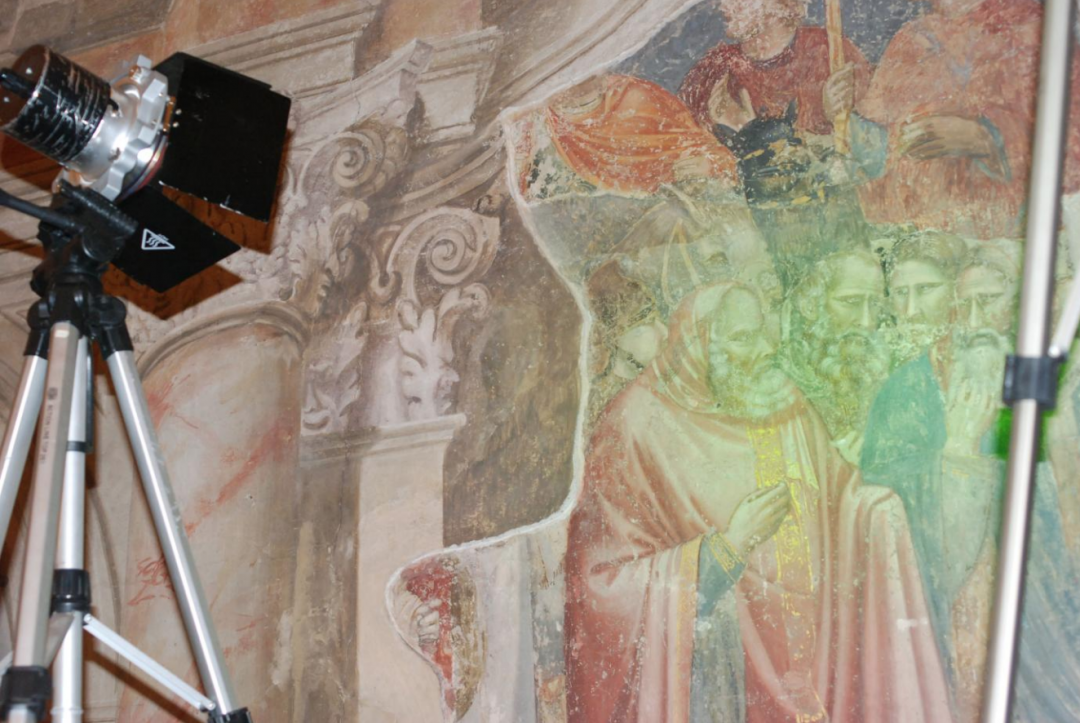 In the “Sala del Capitolo”, located with the complex of the Basilica di Sant’Antonio in Padova, underneath a 16th century mural painting depicting a portal, a few parts of an earlier fresco are outcropping. These visible parts have been brought to light in the early 1800 during the restoration of the room, and they are of outstanding quality, so that several researchers attributed them to Giotto, and on the basis of historical documents they postulate that they might remnants of the very first work of Giotto in Padova before he got the contract to decorate the Scrovegni chapel: a large mural painting depicting a crucifixion. Previous pXRF, FORS, and Multispectral VIS-NIR Imaging measurements on the small outcropping parts of the frescoes were previously performed with in-house instrumentation, and showed that (1) the pigments’ palette of the frescoes is compatible with Giotto’s known techniques and materials, and (2) substantial part of the outcropping frescoes underwent serious damage and repainting, possibly at various stages during the last two centuries. Objectives: The MOLAB measurements are part of a wider project aimed to determine the state of the architecture of the room, to test the hidden presence of existing Giotto’s original frescoes and to characterize the visible parts of the paintings, in order to create a basis for the future restoration and management of this poorly known Giotto’s masterpiece. In the frame of the non-invasive characterization carried out through the MOLAB access, the integrity of the underneath original fresco was tested by THz imaging, NMR profiling, Digital Holographic Speckle Pattern Interferometry (DHSPI) and Stimulated Infra Red Thermography (SIRT).

The measurements were performed by the MOLAB teams during two experimental periods. The researchers from IESL-FORTH, Greece and ITMC- RWTH, Aachen did DHSPI and NMR measurements in the period 27 November-1 December, 2017. The researchers from LRMH-CNRS, Champs-sur-Marne did the THz Imaging and SIRT measurements in the period 9-12 April 2018. During the same periods Ground Penetrating Radar (GPR) and Holographic Radar measurements were performed by the local research group. Most of the measurements were focused on the central part of the South wall, which is thought to hide the original painting depicting a “crowded cruxifiction”. The testing of the actual presence of the Giotto’s fresco underneath the 16th century portal proved to be a rather challenging task, because of the past interventions on the wall increasing the lateral heterogeneity of the surfaces, and the complexity of the stratigraphy. The results obtained by the different techniques still need to be thoroughly crosschecked and data analysis is still in progress. However, interpretation of the preliminary results indicate that (1) there is no door, window, or architectural opening in the central portion of the wall; (2) the plastered surface underneath the visible painted portal can be distinguished into rather homogeneous and very heterogeneous areas, depending on the local strain of the plaster layers and the extensive presence of microcracks. This potentially indicates a different history in different parts of the investigated painted wall. Extensive detachments of the surface layer were also detected.

Once completed, the experimental results should provide a guiding frame for successive interventions. Based on the presently available data, microsampling will performed in selected portions of the wall, and then final suggestions will be prepared to guide the restoration and, possibly, the complete rescue of what is left of the original Gotto’s paintings.