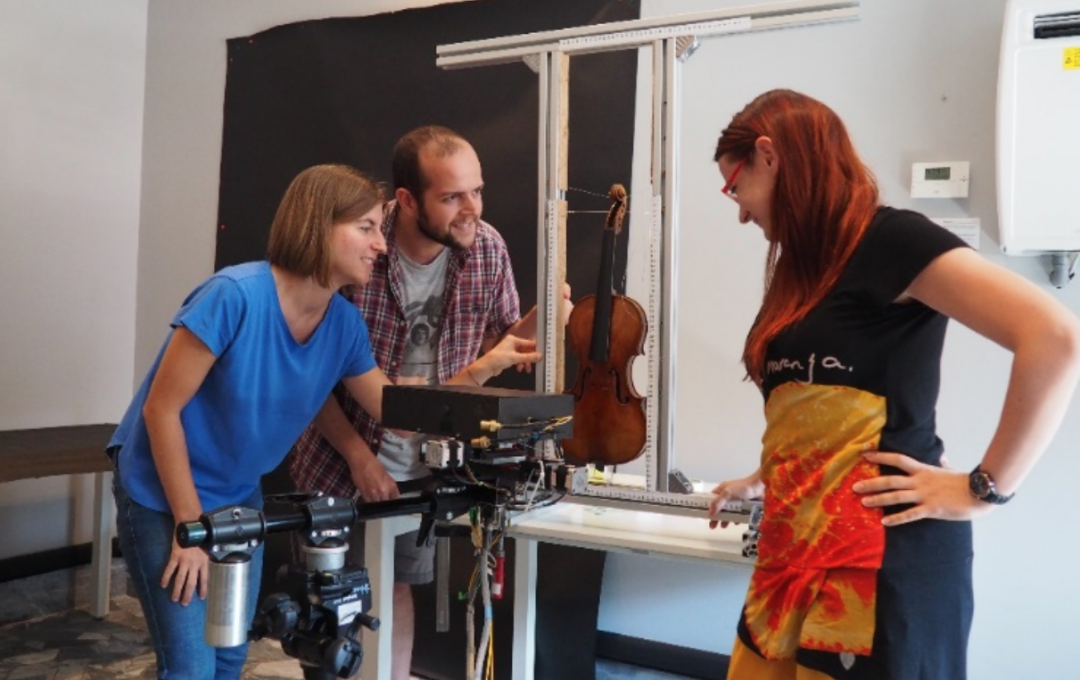 The stratigraphy of a violin is composed of multiple varnish layers laid on wood previously ground coated to prevent varnish penetration. The entire coating system, including the varnish and the ground, could be collectively called the wood finish. Over centuries, however, extensive handling, accidents or restoration and maintenance interventions could have altered the original stratigraphy. As a result, varnish layers have been thinned or even removed from the surface and restoration materials have been added overlaying original ones.

Over the last decades, the study of such a complex structure has been performed both visually with microscopic techniques and instrumentally through various analytical techniques. The composition of varnishes was mostly investigated through infrared and Raman spectroscopies, and micro-chemical chromatographic techniques; on the other hand, their distribution on the surface was analysed by UVIFL photography. Information about inorganic particles dispersed in organic layers was gathered using XRF, PIXE, SR-XRD and SEM-EDX/WDX techniques.

Recently, increasing research efforts have been addressing towards the use of a non-destructive and non-invasive approach to characterize musical instrument stratigraphy, as the sampling on such precious objects is rarely allowed. For this project we proposed the use of Optical Coherence Tomography (OCT) and Nuclear Magnetic Resonance (NMR-MOUSE) as non-invasive tools to assess the accurate layer thickness measurement as well as the presence of cracks, delaminations or particles within the finishing coats, and to get information about the wood density and elasticity, the last one possibly related to some finishing treatments. In the musical instrument field OCT and NMR-MOUSE techniques have found few applications up to now, and never combined. In 2009 Latour et al [1] demonstrated the powerfulness of OCT to detect particles, characterize layers thickness, and image the three-dimensional wood structures below the varnishes in an 18th century Italian violin. In recent years NMR-MOUSE was used for the analysis of violins and bows with the aim of correlating the wood density and wood treatment to the age of the instruments [2,3].

The analyses were performed on five historical violins made by the most renowned makers of the golden age of the Italian lutherie (1550-1750) and hosted in the Museum of Violin in Cremona (Italy). The violins in exam are the ‘Cremonese’ (1715) and the ‘Hellier’ (1679) by Antonio Stradivari, the ‘Hammerle’ (1658c.) by Nicola Amati, the ‘Principe Doria’ (1734) by Giuseppe Guarneri ‘del Gesù’ and the ‘Piccolo’ (1793) by Lorenzo Storioni. Additionally, the OCT technique was applied to nine historical fragments (‘Collezione Sgarabotto’), obtained during past restorations in which damaged parts of original instruments by the luthiers Stainer, Gasparo da Salò, Maggini and Guadagnini were replaced. Several laboratory models simulating musical instruments stratigraphy were further analysed by OCT, in order to help the interpretation of data acquired on real case studies.

The measurements were performed by the MOLAB teams during two experimental methods: (i) the researchers from Nicolaus Copernicus University (Toruń, Poland) with OCT measurements in the period 2-6 July 2018; (ii) the researchers from RWTH Aachen University (Aachen, Germany) with NMR-MOUSE depth-profiling measurements in the period 8-12 October 2018. Most of the single analytical points were acquired on the back plates of the violins. An OCT map was also tentatively collected from the back of the Storioni violin 1793.

The results obtained by the two techniques still need to be crosschecked and data analysis is in progress. Interpretation of the preliminary results gathered on historical fragments by means of OCT highlighted an accurate thickness estimation of the finishing layers composing the stratigraphy, the surfaces morphology as well as the presence of particles and cracks within the coats, and these data are being published. Concerning the preliminary NMR data, uniform density was detected not only across the plane of the back plate but also throughout all depths of the wood, confirming that highly homogeneous wood was used. As regards the relaxation-time distributions, determined by Laplace inversion, any progression towards faster relaxation times in the distribution times may indicate treatments or even damage occurred not only on the surfaces, but sometimes below the surface or in the centre of the maple plates. 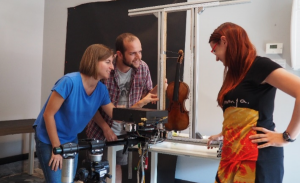 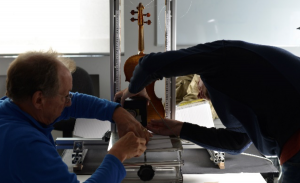